Chalice is a collaborative storytelling game about a party of Arthurian knights searching for the Holy Grail. It requires one Chronicler to moderate the game and portray the perils of the world, and one or more players to portray the knights. A game of Chalice takes around 3-4 hours.

The game tells the story of the physical and spiritual descent of the knights as they quest for, and ultimately fail to find, the Grail. The knight’s quest is a doomed one of chivalric virtue, undone by their own fatal flaws and moral shortcomings.

In order to download this TTRPG you must purchase it at or above the minimum price of $10 USD. You will get access to the following files:

Support this TTRPG at or above a special price point to receive something exclusive.

If this game is something you'd like to try but isn't in your budget right now, please grab a community copy, or contact me.

I throughly enjoyed playing your game! I couldn’t get a group together to play the game right now but the setting and tone of the manual excited me so much I couldn’t wait. So, I went ahead and tried doing a solo play of it! It worked surprisingly well and the experience was deeply moving to me

If your interested, I posted an actual play of my experience playing solo and the heart-wrenching story your game inspired on my blog: http://theadventurersnotebook.com/

Again, excellent work. I’m looking forward to playing it with a full party of knights next time!

Chalice is a 44 page arthurian rpg run on the Trophy engine. It's GM'd, multiplayer, and no prior knowledge of Trophy is needed to play. You do need a deck of tarot cards, though.

In Chalice, you play as knights questing for the grail. The grail is unattainable, and over time your failures and flaws will add up until you lose sight of it and choose a different path.

The Trophy engine is designed for slow-burn horror, and Chalice leans slightly in that direction---but instead of horror, the threat to the PCs is dishonor and worldliness.

Setting-wise, Chalice leans a fair bit into the arthurian supernatural. You could almost certainly use this game to run Dark Souls, and there's a noticeably grand and tragic air to the snippets of gameplay that the book describes.

The game also comes with a scenario, The Cathedral of Green, which is evocative and solid.

I think my only critique of Chalice is that one of the central conceits, that the knights give in to sin and do not succeed, is going to feel forced if the players play to succeed rather than to destroy their characters. It's really worth getting everyone on the same page before playing that the goal is to lose stylishly, not to win.

Overall, though, I would strongly recommend this to anyone who likes arthurian roleplaying, or who wants to see some more of the versatility of the Trophy engine. It's well-written, atmospheric, and a cool alternative to overt horror.

Just a minor note on the layout: at every chapter the decorative banners flip side. Not a huge deal, but a bit annoying. The banners also stick out a bit too much, maybe make their background grey like the page?

I love the way all these concepts from Arthuriana are incorporated. Vices, hubris, deals with the Devil. 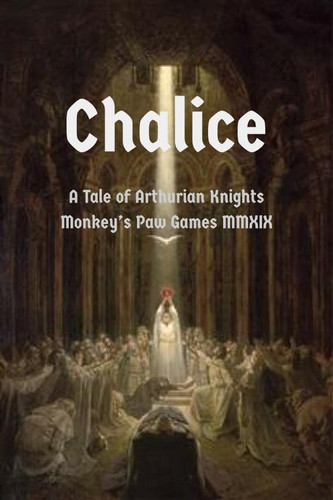 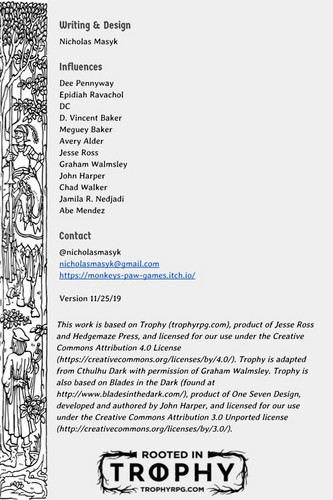 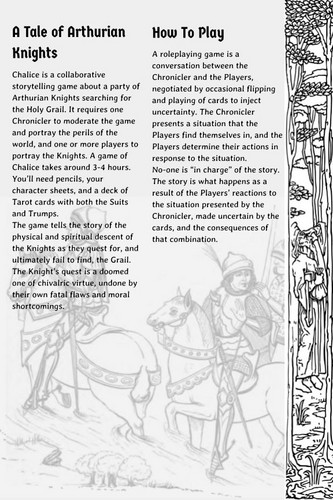 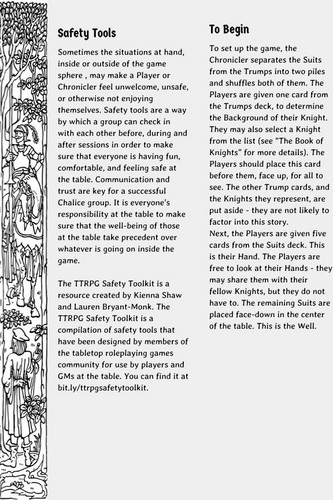 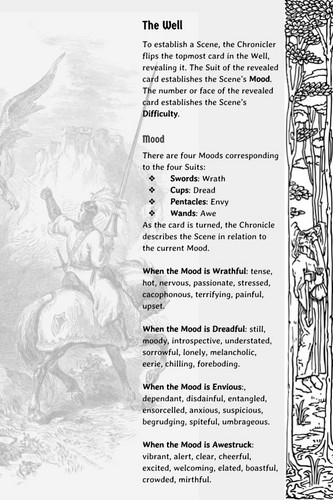