KANABO is a rules-light pen-and-paper fantasy role-playing game set loosely in Tokugawa-era Japan (1600–1868) and based on iconic sword-fighting genre movies set in that time period, with cultural consulting by James Mendez Hodes (@LulaVampiro). This is a trio of zines plus a character sheet.

Based on Christina Stone-Bush's Brighthammer and John Geary's Sledgehammer, KANABO is an independent work compatible with Sledgehammer and Brighhammer but not affiliated with Gayhalforc or HyveMynd.

In order to download this TTRPG you must purchase it at or above the minimum price of $5 USD. You will get access to the following files:

Support this TTRPG at or above a special price point to receive something exclusive.

If this game is something you'd like to try but isn't in your budget right now, please grab a community copy, or contact me.

I love Kanabo, a nice neat little system that supports the flavour of the theme. Nice clean layout of the rules, handily sorted into three books (I have the printed version, very nice). Will run this at our OSR Convention next week (2021 20th November) using a home-made setting, Land of Ronin, based on the anime Samurai 7 and Ninja Scroll.
Looking forward to a Bestiary.

The core game is split into three PDFs (Characters, GM, Adventures) for a total of 49 pages. The layout of each PDF is consistent, easy to read, and has a home-printed OSR-zine-y sort of aesthetic.

Setting-wise, Kanabo uses a loosely historical period (the Edo era) but doesn't position itself as a historical game. There are overt fantasy elements in it, and it prioritizes engaging the group with the story over worrying deeply about technical accuracy. It also recommends making any adjustments you need to the setting in order to include the people at your table.

Mechanically, Kanabo is loose but still has some crunch. A typical roll is d100, roll under, using one of four very loosely descriptive stats. Those stats start somewhere between 22--45, but you add bonuses from skills, items, and other factors to give you decent odds of an uncomplicated success. If you fail the roll, you still get what you were after, but with a complication (such as taking damage, offending someone, escalating a situation to violence, etc.) Rolling doubles gives you Fate, which you can spend later for a variety of one-shot benefits.

Combat uses the same basic system, but you deal damage equal to your tens die (meaning the higher your skill, the more potential damage you can deal.) Enemies don't roll, they have static damage values you take if you fail an attack. And you can boost your odds of success throughout the combat by dealing damage, creating openings, or defending innocents. This keeps the tempo of fights escalating, and makes them more dangerous up front until they turn in the party's favor.

Character advancement is frequent and significant (a stat point or a skill each session,) but death is also easy to come by. Equipment and supplies are tracked loosely, and don't have stats of their own, but travel consists of hexcrawling and has some resource management to it. By default, player parties are from all walks of life (not just disillusioned sword-hauling nobility,) and having sailors, hunters, farmers, etc gives everyone something to do around the campfire.

Resource-wise, a variety of tools are provided to both players and GMs. Included is a section on safety (using X-Card and Lines & Veils,) a full handbook for GMs, and a starter adventure. There's also a village-with-a-problem generator that outputs a detailed hexmap and a solid adventure, although you'll want to use it before a session and sand off the rough edges for best results.

The sample adventure PDF, Peach Trees Village, comes with a small map and a lot of randomized encounters. It doesn't have a single, uniform adventure structure (the group will sort of have to decide what they want to do there,) but there's a lot of hooks with details for you to fill in, allowing you to link the story together in whichever ways feel most appropriate.

Overall, Kanabo is a loose, easy-to-use game system with a jidaigeki flavor. If you want to tell a story about wanderers from all walks of life getting involved in post-sengoku village problems, I'd recommend checking it out.

On page 17 there are two identical tables, connected to one another. The Trinket and Valuable Treasure tables both have the exact same contents.

On page 18 there is no header for the bottom table, which I assume is hoard of coin?

Just finished updating/editing! This is what happens when you hit "publish" at 330 am XD

Hey, this is fantastic. Have we talked about it before? I love the damage statist, with the 10's value doing your damage. More powerful characters can do more damage that way. So simple.

Also, I love that you focus, not just on samurai, but on all walks of life. I feel that a Japanese-inspired game just isn't good if you don't do that. Rolled up a character that I really like:

From a river village, has a net, knows sailing and swimming

Sailor, has a matchlock pistol, knows firearms and brawling

Has some rice balls

Fashionable with earnest eyes and a slim frame

Precise-looking hands with a joyful face and a breathy voice 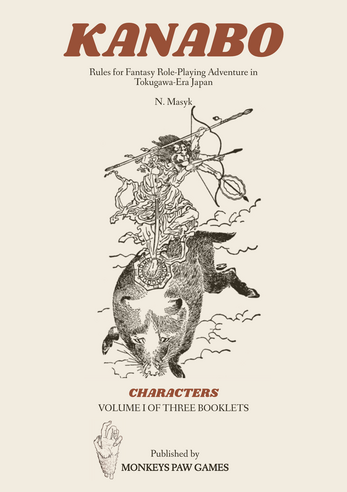 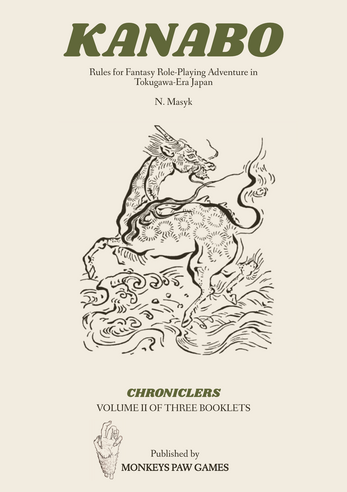 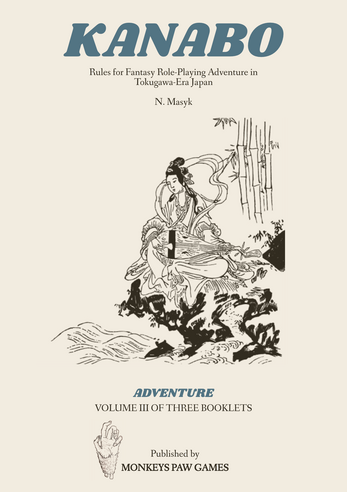 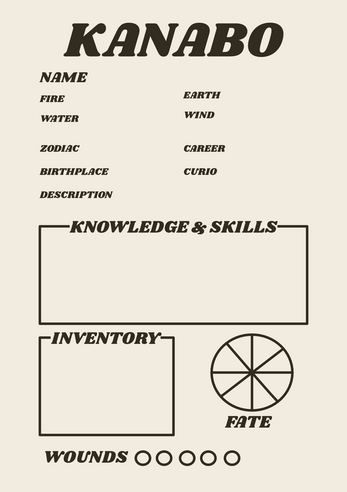